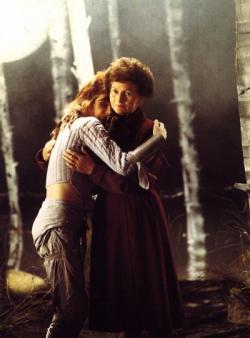 Born on June 20, 1918, Hannah Patricia Bush was Kate's mother. She worked as a staff nurse at Epsom Grove Hospital and was one of 12 children who originally hailed form the harbour town of Dungarvan in County Waterford (Ireland).

Hannah's voice can be heard in The Ninth Wave, saying the line 'Come here with me now' in the song And Dream Of Sheep, and among the many voices calling to the heroine between the tracks Under Ice and Waking The Witch. She can be seen in the video for Suspended in Gaffa.

Hannah Bush passed away on 14 February 1992, and the album The Red Shoes is dedicated to her memory.