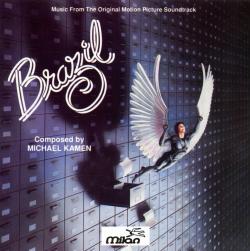 Title song from the 1985 British film directed by Terry Gilliam and written by Gilliam, Charles McKeown and Tom Stoppard. Ary Barroso's 1939 song 'Aquarela Do Brasil' ('Watercolor Of Brazil', often simply 'Brazil') in a version specifically performed by Geoff Muldaur is the leitmotif of the movie, although other background music is also used. Michael Kamen, who scored the film, originally recorded 'Brazil' with vocals by Kate Bush. This recording was not included in the actual film or the original soundtrack release; however, it has been subsequently released on re-pressings of the soundtrack.

There are actually two versions of 'Brazil': one was included on a 1992/1993 CD release of the soundtrack from the movie 'Brazil'. A new version, with different vocals by Kate, was released in 1998 on the album 'Michael Kamen's Opus'.

Return I will
To old Brazil