Blow Away (For Bill) 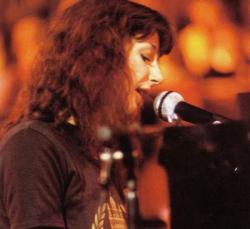 Song written by Kate Bush. It was dedicated to Bill Duffield. The phrase 'Put out the Light, then put out the light' comes from Shakespeare's Othello, in the scene just before Othello kills Desdemona. The song mentions the names of deceased musicians, in the following order: Minnie Riperton, Keith Moon, Sid Vicious, Buddy Holly and Sandy Denny.

The album version is the only officially released version of the song. However, in 2010 a demo version has surfaced on YouTube.

Kate debuted the song on November 18, 1979 during a concert at the Royal Albert Hall, celebrating 75 years of the London Symphony Orchestra. This was the first and only performance of the song.

Kate about 'Blow Away (For Bill)'

'Blow Away' is a comfort for the fear of dying and for those of us who believe that music is perhaps an exception to the 'Never For Ever' rule. (Kate Bush Club newsletter, September 1980)

So there's comfort for the guy in my band, as when he dies, he'll go "Hi, Jimi!" It's very tongue-in-cheek, but it's a great thought that if a musician dies, his soul will join all the other musicians and a poet will join all the Dylan Thomases and all that.

None of those people [who have had near-death experiences] are frightened by death anymore. It's almost something they're looking forward to. All of us have such a deep fear of death. It's the ultimate unknown, at the same time it's our ultimate purpose. That's what we're here for. So I thought this thing about the death-fear. I like to think I'm coming to terms with it, and other people are too. The song was really written after someone very special died.
Although the song had been formulating before and had to be written as a comfort to those people who are afraid of dying, there was also this idea of the music, energies in us that aren't physical: art, the love in people. It can't die, because where does it go? It seems really that music could carry on in radio form, radio waves... There are people who swear they can pick up symphonies from Chopin, Schubert. We're really transient, everything to do with us is transient, except for these non-physical things that we don't even control... (Kris Needs, 'Lassie'. Zigzag (UK), November 1985)

One of the band told me last night
That music is all that he's got in his life
So where does it go?
Surely not with his soul
Will all of his licks and his R'n'B

Blow away?
Blow away
Blow away

Put out the light, then, put out the light
Vibes in the sky invite you to dine
Dust to dust,
Blow to blow
Bolan and Moony are heading the show tonight