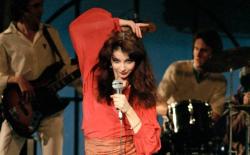 Bio's Bahnhof was the title of an entertainment show hosted by Alfred Biolek, which was broadcast by ARD in Germany from 9 February 1978 to 28 October 1982 in 30 episodes from the former depot Hall of the Köln-Frechen-Benzelrather Eisenbahn live.

A special feature of the program was that the artists performing were from all styles of music: pop as well as folk, avant-garde and contemporary music. With the exception of Vicky Leandros in the first episode (due to a cold), all artists sang live.

Alfred Biolek proved (in collaboration with his editors) an extraordinary sense of future stars. Among others, he presented Sting, Helen Schneider and Kate Bush to the German audience for the first time.

Indeed, Kate Bush made her very first television appearance at Bio's Bahnhof, performing Kite and Wuthering Heights on 9 February 1978. The backdrop, which was supposed to represent the Yorkshire moors, included a volcano.According to the show's presenter, Alfred Biolek: "I contacted various record labels, which artists might be suitable for my new show. One day I was sitting at EMI in London, and all sorts of names were mentioned - and I suddenly I noticed a song that sounded softly over the office speakers. I interrupted the conversation, listening. And I was thrilled! I asked: "Who is this?" And they said: "A brand new artist, she has only just begun". And I thought we could just invite her."