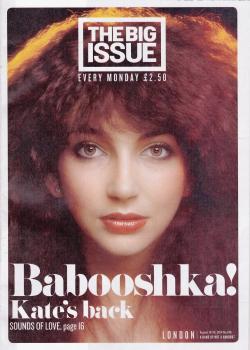 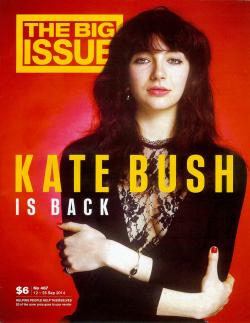 Street newspaper, founded by John Bird and Gordon Roddick as a response to the increasing numbers of homeless people in London. The Body Shop provided a starting capital. Initially, the magazine was published monthly, starting in September 1991, but June 1993 the magazine became a weekly. The venture continued to expand with national editions being established in Scotland and Wales, as well as regional editions for Northern England and England's South West Region. The magazine is also produced and sold in Australia, Ireland, South Korea, South Africa, Japan, Namibia, Kenya, Malawi and Taiwan.

To become a vendor, one must be homeless or almost homeless, vulnerably housed or marginalised in some way.

In 2001, the magazine sold nearly 300,000 copies per week. Between 2007 and 2011, the circulation of The Big Issue declined from 167,000 to less than 125,000. Competition between vendors also increased at this time. In January 2012, the magazine was relaunched, with an increased focus on campaigning and political journalism. In 2016, The Big Issue celebrated surpassing 200 million magazine sales.

Kate Bush appeared in The Big Issue twice in 2014. On both occasions she appeared on the cover of the magazine: on 18 August 2014 (London edition) and on 12 September 2014 (Australian edition).