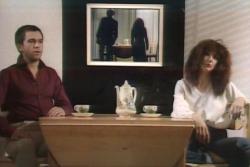 Song written by Roy Harper and released on his album 'Flat Baroque And Berserk' (1970). It is a short song, a story of an old affair recollected in the home of an ex-lover. It is a song full of regrets on both sides seen through their memories, about things that should have been said but were not. Desires, including for children, that never came to pass. For a brief moment it seems old passion is being rekindled, but instead the story unravels before the listener's ears.

The song was covered by Kate Bush and Peter Gabriel, performed during the Christmas Special in 1979. For a while, a single release was considered, but this idea was abandoned in 1980.

The kettle's on, the sun has gone
Another day
She offers me Tibetan tea on a flower tray
She's at the door, she wants to score
She dearly needs to say

And across the room inside a tomb
A chance is waxed and wanes
The night is young, why are we so hung up
In each others chains
I must make her, I must take her
While the dove domains
And feel the juice run as she flies
Run my winds under her sighs
As the flames of eternity rise
To lick us with the first born lash of dawn.

And without a sound
I turn around
And I walk away