And So Is Love 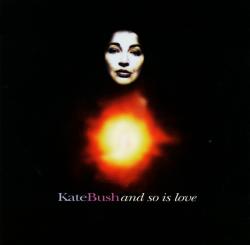 'And So Is Love' - UK CD-single sleeve 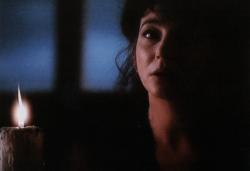 Still from the music video for 'And So Is Love'

Song written by Kate Bush. Originally released on her seventh album The Red Shoes. Also released as a single by EMI Records in the UK on 7 November 1994.

The music video for 'And So Is Love' was also used in the movie The Line, The Cross and The Curve and features Kate singing the song in a dark room lit only by a candle.

After the release of the single, it climbed to number 26 in the UK singles chart. The chart entry marked Bush's first appearance on the chart show Top Of The Pops in nine years. It was a straightforward performance with Kate lipsynching the song in front of the studio audience with two female backing singers by her side.

'And so is love' was covered by A Balladeer and The Hounds Of Love.

And you huh?
You do huh?

We let it in
We give it out
And in the end
What's it all about?
It must be love

We used to say
"Ah Hell, we're young"
But now we see that life is sad
And so is love

We used to say
"Ah Hell, we're young"
But now we see that life is sad
And so is love

And whatever happens
What really matters?
It's all we've got
Isn't that enough?

Life is sad and so is love

Life is sad and so is love