And Dream Of Sheep 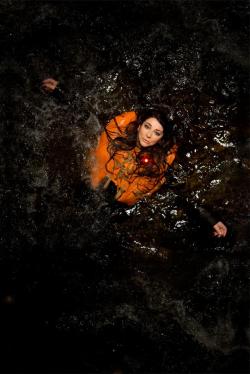 Song written by Kate Bush. Originally released on her fifth studio album Hounds Of Love. First track of The Ninth Wave suite. Kate travelled to Dublin in the spring of 1984 for extended studio sessions for 'And Dream Of Sheep' and 'Jig Of Life'. Donal Lunny recalled later that Kate asked him to play the single whistle note at the end of the track over and over again for three hours, in search of just the right 'bend' in the note.

Kate Bush recorded a video of 'And Dream Of Sheep' in 2014, to be shown during the Before The Dawn shows in London, 2014. She spent three days in a special tank at Pinewood Studios. In the video, Bush is in a lifejacket floating in water, looking up at the camera as if waiting to be rescued, singing the song live.

Kate about 'And Dream Of Sheep'

[The Ninth Wave] is about someone who is in the water alone for the night. 'And Dream Of Sheep' is about them fighting sleep. They're very tired and they've been in the water waiting for someone to come and get them, and it's starting to get dark and it doesn't look like anyone's coming and they want to go to sleep. They know that if they go to sleep in the water they could turn over and drown, so they're trying to keep awake; but they can't help it, they eventually fall asleep - which takes us into the second song. (Kate Bush Club newsletter, Issue 18, 1985)

An engineer we were working with picked out the line in 'And Dream Of Sheep' that says 'Come here with me now'. I asked him why he liked it so much. He said, 'I don't know, I just love it. It's so moving and comforting.' I don't think he even knew what was being said exactly, but the song is about someone going to sleep in the water, where they're alone and frightened. And they want to go to sleep, to get away from the situation. But at the same time it's dangerous to go to sleep in water, you could drown. When I was little, and I'd had a bad dream, I'd go into my parents' bedroom round to my mother's side of the bed. She'd be asleep, and I wouldn't want to wake her, so I'd stand there and wait for her to sense my presence and wake up. She always did, within minutes; and sometimes I'd frighten her - standing there still, in the darkness in my nightdress. I'd say, 'I've had a bad dream,' and she'd lift bedclothes and say something like 'Come here with me now.' It's my mother saying this line in the track, and I briefed her on the ideas behind it before she said it. And I think it's the motherly comfort that this engineer picked up on. In fact, he said this was his favourite part of the album. (Kate Bush Club newsletter, Issue 21, 1987)

Once I wrote that, that was it, that was the beginning of what then became the concept. And really, for me, from the beginning. 'The Ninth Wave' was a film, that's how I thought of it. It's the idea of this person being in the water, how they've got there, we don't know. But the idea is that they've been on a ship and they've been washed over the side so they're alone in this water. And I find that horrific imagery, the thought of being completely alone in all this water. And they've got a life jacket with a little light so that if anyone should be traveling at night they'll see the light and know they're there. And they're absolutely terrified, and they're completely alone at the mercy of their imagination, which again I personally find such a terrifying thing, the power of ones own imagination being let loose on something like that. And the idea that they've got it in their head that they mustn't fall asleep, because if you fall asleep when you're in the water, I've heard that you roll over and so you drown, so they're trying to keep themselves awake. (Richard Skinner, 'Classic Albums interview: Hounds Of Love'. BBC Radio 1, 26 January 1992)

Let me be weak,
Let me sleep
And dream of sheep

"Come here with me now."

Oh, I'll wake up
To any sound of engines
Ev'ry gull a seeking craft
I can't keep my eyes open
Wish I had my radio

Let me be weak,
Let me sleep
And dream of sheep

Ooh, their breath is warm
And they smell like sleep,
And they say they take me home
Like poppies heavy with seed
They take me deeper and deeper