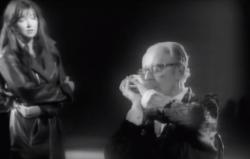 Kate Bush and Larry Adler in the music video for 'The Man I Love', 1994

Lawrence "Larry" Cecil Adler was born in Baltimore, MD (USA) on 10 February 1914. He taught himself to play the harmonica. In 1927 he won a contest playing a Beethoven minuet, and a year later he ran away from home to New York. He soon got his first theatre work and got into a series of vaudeville acts. In 1934, he starred in the Paramount film 'Many happy returns'. He was hired by theatrical producer C.B. Cochran to perform in London. He became a star, causing people to join his fanclub and harmonica sales to increase 20-fold.

Adler did not learn to read music until 1940, when the French composer Jean Berger wrote a harmonica concerto for him. Ralph Vaughan Williams, Darius Milhaud, and others also wrote musical scores for Adler. Accused of communist sympathies and blacklisted during the ascendancy of U.S. Sen. Joseph R. McCarthy, Adler was unable to find work and took up residence in England. He wrote musical scores for motion pictures and television and also wrote several books, including 'How I Play' (1937) and 'Larry Adler's Own Arrangements' (1960). His autobiography, 'It Ain't Necessarily So', was published in 1987.

The tribute album The Glory Of Gershwin was released in 1994, in celebration of Larry Adler's 80th birthday. Various artists including Kate recorded Gershwin tracks for this album. The album included the track The Man I Love, which featured both Kate Bush and Larry Adler.

Adler married Eileen Walser in 1952; they had two daughters and one son. They divorced in 1957. He married Sally Kline in 1959; they had one daughter, Marmoset. They divorced in 1963. Larry Adler died in St Thomas' Hospital, London, at 87, on 7 August 2001. He was cremated at Golders Green Crematorium, where his ashes remain.