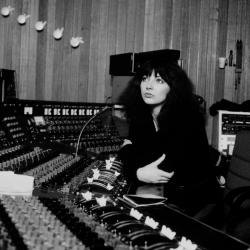 Abbey Road Studios (formerly known as EMI Studios) is a recording studio at 3 Abbey Road, St. John's Wood, London (UK). It was established in November 1931 by the Gramophone Company, later EMI, which owned it until Universal Music took control of part of EMI in 2012.

Abbey Road Studios is most notable as being the 1960s' venue for innovative recording techniques adopted by the Beatles, Pink Floyd, the Hollies, Badfinger and also Kate Bush. One of its earliest world-famous-artist clients was Paul Robeson, who recorded December 1931 and went on to record many of his best-known songs there. Towards the end of 2009, the studio came under threat of sale to property developers. However, the British Government protected the site, granting it English Heritage Grade II listed status in 2010, thereby preserving the building from any major alterations.

Kate worked at Abbey Road Studios on the albums Never For Ever, The Dreaming, and Hounds Of Love in Studio 2, and the orchestral parts for the albums The Sensual World and The Red Shoes. On 17 June 1981, the music video for the song Sat In Your Lap was recorded in the cavernous Studio 1, a huge space about half an acre in size. On 12 November 1981, Kate attended a 50th anniversary party for the studio, and cut the birthday cake alongside singer Helen Shapiro. In March 1986, she recorded a performance of the song Under The Ivy for the 100th broadcast of The Tube.

Being on your own in Studio 2 is a fascinating experience. I felt like there were at least ten other people there with me... I think it's a combination of all the people who have performed there over the years and their combined creativity. (Brian Southall, Abbey Road, 2002. ISBN 978-0711991118)