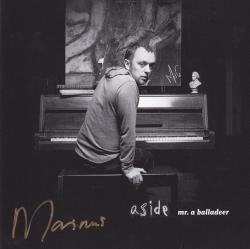 The album 'Aside' by A Balladeer

The Dutch band A Balladeer was founded by singer-songwriter Marinus de Goederen. In 2002, the band won the 3FM BuZz Award and another award the following year at the final of the annual Dutch musical contest De Grote Prijs van Nederland (The Big Prize of the Netherlands). In 2004, A Balladeer opened up for international acts Saybia and Keane and released their first EP: 'Rumor Had It'.

Two years later, their debut album 'Panama' was released by EMI Music. Lead single 'Swim with Sam' became a hit in the Netherlands. In early 2007, the band won a Zilveren Harp (Silver Harp), a supporting prize for promising musical artists.