Watching You Without Me 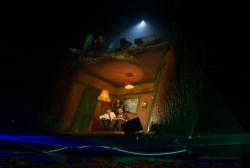 In 2014, Kate performed 'Watching You Without Me' live during all the shows of Before The Dawn.

Kate about 'Watching You Without Me'

Now, this poor sod [laughs], has been in the water for hours and been witch-hunted and everything. Suddenly, they're kind of at home, in spirit, seeing their loved one sitting there waiting for them to come home. And, you know, watching the clock, and obviously very worried about where they are, maybe making phone calls and things. But there's no way that you can actually communicate, because they can't see you, they can't you. And I find this really horrific, [laughs] these are all like my own personal worst nightmares, I guess, put into song. And when we started putting the track together, I had the idea for these backing vocals, you know, [sings] "you can't hear me". And I thought that maybe to disguise them so that, you know, you couldn't actually hear what the backing vocals were saying. (Richard Skinner, 'Classic Albums interview: Hounds Of Love. Radio 1 (UK), aired 26 January 1992)