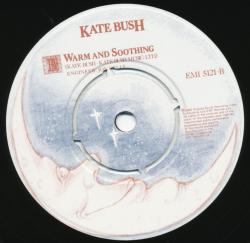 Song written by Kate Bush. Originally released as the B-side of December Will Be Magic Again in 1980. The lyric starts out with a description of the warmth of a family home, but ends up describing a fear of growing old, trapped in a relationship that doesn't seem to be very warm nor soothing.

Kate about 'Warm And Soothing'

'Warm And Soothing' was a demo-tape which we did basically just to see what Abbey Road sounded like. We wanted to work there, and we went into Studio Two, and really the only way we could tell if it was going to sound good was if I went and did a piano vocal. So I did, and it sounded great. (Peter Swales, 'Kate Bush'. Musician, Fall 1985)

I'm afraid by the way we grow old
My darling