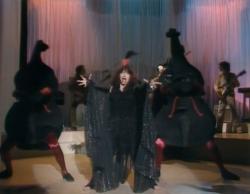 Kate Bush performing 'Violin' during the Christmas Special in 1979

Song written by Kate Bush. Recorded in 1979 and released on the album Never For Ever.

The studio version is the only officially released version. However, a demo version of 'Violin' has also surfaced. It appears on the bootleg 7" single 'Cathy Demos Volume Three' and various bootleg CD's.

'Violin' was premiered during the Tour of Life, when it was performed as the eighth song of the first act. At the end of 1979, Kate performed 'Violin' during the Christmas Special, after which she never performed the song again.

'Violin' was covered by Theo Bleckmann.

'Violin' is for all the mad fiddlers from 'Paganini' to 'Old Nick' himself. (Kate Bush Club newsletter, September 1980)

Four strings across the bridge
Ready to carry me over