Room For The Life 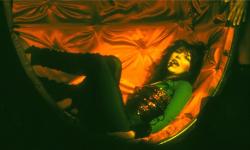 Kate Bush performing 'Room For The Life' during the Tour of Life, 1979

Song written by Kate Bush, first released on Kate's debut album The Kick Inside. The lyrics are presumed to reflect Kate's views on womanhood. According to this view, women have a much stronger survival unit then men since they can bear children, and thus should use their advantage to help men rather then play games with them.

'Room For The Life' was included on the setlist for the Tour of Life. The song wasn't included in the official video Live at Hammersmith Odeon, but there is still a filmed performance in a television documentary called 'Kate Bush In Concert', broadcast in Germany and the Netherlands.

Like it or not, we keep bouncing back
because we're woman