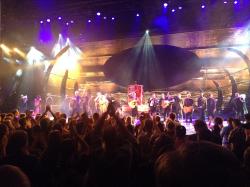 In 2014, Kate performed 'The Morning Fog' live during all the shows of Before The Dawn.

Kate about 'The Morning Fog'

Well, that's really meant to be the rescue of the whole situation, where now suddenly out of all this darkness and weight comes light. You know, the weightiness is gone and here's the morning, and it's meant to feel very positive and bright and uplifting from the rest of dense, darkness of the previous track. And although it doesn't say so, in my mind this was the song where they were rescued, where they get pulled out of the water. And it's very much a song of seeing perspective, of really, you know, of being so grateful for everything that you have, that you're never grateful of in ordinary life because you just abuse it totally. And it was also meant to be one of those kind of "thank you and goodnight" songs. You know, the little finale where everyone does a little dance and then the bow and then they leave the stage. [laughs] (Richard Skinner, 'Classic Albums interview: Hounds Of Love. Radio 1 (UK), aired 26 January 1992)

D'you know what?
I love you better now