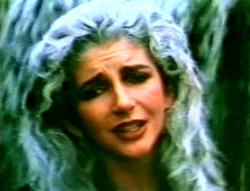 Kate performing 'The Kick Inside' during the Efteling TV special, 1978

Song written by Kate Bush. First released on Kate's debut album The Kick Inside. The lyrics were inspired by a traditional folk song called "Lucy Wan". According to Paddy Bush, at the time of recording the song there were some experiments where actual sections from "Lucy Wan" were taken and processed and used in a very unusual way.

The studio version is the only officially released version. However, a demo version of 'The Kick Inside' has also surfaced. It appears on the bootleg 7" single 'Cathy Demos Volume One' and various bootleg CD's.

Kate performed 'The Kick Inside' during a TV special recorded in the Netherlands at the Efteling amusement park.

'The Kick Inside' was covered by Julie Covington, Thomas Eklund, Electrician, Goodknight Productions and Victoria Storm.

Kate about 'The Kick Inside'

The song The Kick Inside, the title track, was inspired by a traditional folk song and it was an area that I wanted to explore because it's one that is really untouched and that is one of incest. There are so many songs about love, but they are always on such an obvious level. This song is about a brother and a sister who are in love, and the sister becomes pregnant by her brother. And because it is so taboo and unheard of, she kills herself in order to preserve her brother's name in the family. The actual song is in fact the suicide note. The sister is saying 'I'm doing it for you' and 'Don't worry, I'll come back to you someday.' (Self Portrait, 1978)

That's inspired by an old traditional song called 'Lucy Wan.' It's about a young girl and her brother who fall desperately in love. It's an incredibly taboo thing. She becomes pregnant by her brother and it's completely against all morals. She doesn't want him to be hurt, she doesn't want her family to be ashamed or disgusted, so she kills herself. The song is a suicide note. She says to her brother, 'Don't worry. I'm doing it for you.' (Jon Young, Kate Bush gets her kicks. Trouser Press, July 1978)

Your sister I was born
You must lose me like an arrow, shot into the killer storm