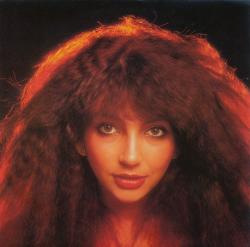 Song written by Kate Bush, released as the lead single of her second album Lionheart on 27 October 1978. The story of the song concerns an actor who gets thrust into the lead role of 'The Hunchback of Notre Dame' after the original actor dies in an accident on the film set. He is guilt-ridden ends up being haunted by the ghost of the jealous original actor, who was a former friend.

'Hammer Horror' was released as a 7" single only, featuring the song Coffee Homeground on the B-side.

There are three officially released versions of 'Hammer Horror': the album version and the single version (which omits the sound of the gong at the very end) plus a live version recorded at the Hammersmith Odeon during the Tour of Life in 1979. However, a demo version from 1977 has also surfaced. It appears on the bootleg 7" single 'Cathy Demos Volume One' and various bootleg CD's.

A promotional video was made for the single, directed by Keef and featuring Bush and a black-masked dancer performing the song against a black background.

Kate performed 'Hammer Horror' in various places all over the world. Some notable performances include 'Countdown' in Australia on October 12, 1978 (a world premiere) and at the San Remo festival in Italy in 1979.

On Radio 1's Round Table on October 27, 1978 the single was reviewed by DJ's John Peel ("I didn't like the album at all and I'm not too enthused with this either") and Paul Gambaccini ("It doesn't grab me immediately as The Man With The Child In His Eyes"). Record Mirror's Ronnie Gurr opined: "Kate keeps up the formula and doesn't upset the fans... sounds like Joni Mitchell popping tabs with the LSO." In NME, Tony Parsons wrote: "Ominous post ELO orchestration with the unrequited lust of a broken affair viewed as living dead love-bites-back as in classic 50's British celluloid, a real nail biter, hypnotic and disconcerting."

The song is not about, as many think, Hammer Horror films. It is about an actor and his friend. His friend is playing the lead in a production of The Hunchback of Notre Dame, a part he's been reading all his life, waiting for the chance to play it. He's finally got the big break he's always wanted, and he is the star. After many rehearsals he dies accidentally, and the friend is asked to take the role over, which, because his own career is at stake, he does. The dead man comes back to haunt him because he doesn't want him to have the part, believing he's taken away the only chance he ever wanted in life. And the actor is saying, "Leave me alone, because it wasn't my fault - I have to take this part, but I'm wondering if it's the right thing to do because the ghost is not going to leave me alone and is really freaking me out. Every time I look round a corner he's there, he never disappears."
The song was inspired by seeing James Cagney playing the part of Lon Chaney playing the hunchback - he was an actor in an actor in an actor, rather like Chinese boxes, and that's what I was trying to create. (Kate Bush Club Newsletter, November 1979)

I've got a hunch that you're following,
to get your own back on me