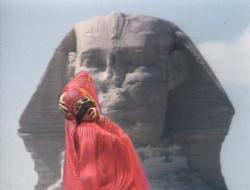 Kate Bush performing 'Egypt' during the Christmas Special in 1979

Song written by Kate Bush. She described the song as 'an attempted audial animation of the romantic and realistic visions of a country'. The song was premiered during the Christmas Special in 1979 and released on the album Never For Ever in 1980.

The song is very much about someone who has not gone there thinking about Egypt, going: "Oh, Egypt! It's so romantic... the pyramids!" Then in the breaks, there's meant to be the reality of Egypt, the conflict. It's meant to be how blindly we see some things - "Oh, what a beautiful world", you know, when there's shit and sewers all around you. (Kris Needs, Fire in the Bush. Zigzag (UK), 1980)