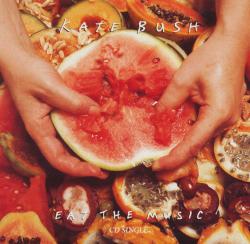 Song written by Kate Bush. It was originally released as the lead single for The Red Shoes in the USA on September 7, 1993, while everywhere else in the world Rubberband Girl was released. In the UK, a small handful of extremely rare 7" and promotional CD-singles were produced, but were recalled by EMI Records at the last minute. A commercial release followed in the Summer of 1994 in the Netherlands and Australia, along with a handful of other countries. The song's lyrics are about opening up in relationships to reveal who we really are inside.

The music video for 'Eat The Music' was also used in the movie The Line, The Cross and The Curve and features Kate dancing in a field of fruits together with other dancers. It is a slightly hypnotic sequence.

What am I singing?
A song of seeds