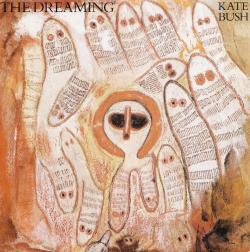 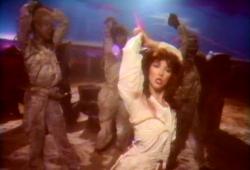 Still from the music video for 'The Dreaming'

Song written by Kate Bush. Originally released as the lead single from her fourth album The Dreaming on 26 July 1982. The song is about the destruction of Aboriginal homelands by white Australians in their quest for weapons-grade uranium. The original title for the track was 'The Abo Song', which unwittingly made use of a racial slur. Promotional 12" copies bearing this title were circulated before being recalled.

'The Dreaming' was released as a 7" single only. The B-side was Dreamtime.

'The Dreaming' was covered by Big City Orchestre.

Kate about 'The Dreaming'

We started with the drums, working to a basic Linn drum machine pattern, making them sound as tribal and deep as possible. This song had to try and convey the wide open bush, the Aborigines - it had to roll around in mud and dirt, try to become a part of the earth. "Earthy" was the word used most to explain the sounds. There was a flood of imagery sitting waiting to be painted into the song. The Aborigines move away as the digging machines move in, mining for ore and plutonium. Their sacred grounds are destroyed and their beliefs in Dreamtime grow blurred through the influence of civilization and alcohol. Beautiful people from a most ancient race are found lying in the roads and gutters. Thank God the young Australians can see what's happening.
The piano plays sparse chords, just to mark every few bars and the chord changes. With the help of one of Nick Launay's magic sounds, the piano became wide and deep, effected to the point of becoming voices in a choir. The wide open space is painted on the tape, and it's time to paint the sound that connects the humans to the earth, the dijeridu. The dijeridu took the place of the bass guitar and formed a constant drone, a hypnotic sound that seems to travel in circles.
None of us had met Rolf (Harris) before and we were very excited at the idea of working with him. He arrived with his daughter, a friend and an armful of dijeridus. He is a very warm man, full of smiles and interesting stories. I explained the subject matter of the song and we sat down and listened to the basic track a couple of times to get the feel. He picked up a dijeridu, placing one end of it right next to my ear and the other at his lips, and began to play.
I've never experienced a sound quite like it before. It was like a swarm of tiny velvet bees circling down the shaft of the dijeridu and dancing around in my ear. It made me laugh, but there was something very strange about it, something of an age a long, long time ago.
Women are never supposed to play a dijeridu, according to Aboriginal laws; in fact there is a dijeridu used for special ceremonies, and if this was ever looked upon by a woman before the ceremony could take place, she was taken away and killed, so it's not surprising that the laws were rarely disobeyed. After the ceremony, the instrument became worthless, its purpose over. (Kate Bush Club newsletter, October 1982)

Well, years ago my brother bought 'Sun Arise' [by Rolf Harris] and I loved it, it was such a beautiful song. And ever since then I've wanted to create something which had that feel of Australia within it. I loved the sound of the traditional aboriginal instruments, and as I grew older, I became much more aware of the actual situation which existed in Australia between the white Australian and the aborigines, who were being wiped out by man's greed for uranium. Digging up their sacred grounds, just to get plutonium, and eventually make weapons out of it. And I just feel that it's so wrong: this beautiful culture being destroyed just so that we can build weapons which maybe one day will destroy everything, including us. We should be learning from the aborigines, they're such a fascinating race. And Australia - there's something very beautiful about that country. ('The Dreaming'. Poppix (UK), Summer 1982)

The title actually came last. It always does. It's the most difficult thing to do. I tried to get a title that would somehow say what was in there. It was really bad. Then I found this book [Hands me huge tome on australian lore]. I'd written a song and hadn't really given it a proper name. I knew all about this time they call Dreamtime, when animals and humans take the same form. It's this big religious time when all these incredible things happen. The other word for it is The Dreaming. I looked at that written down and thought, ``Yeah!'' (Kris Needs, 'Dream Time In The Bush'. ZigZag (UK), 1982)

The Aboriginals are not alone in being pushed out of their land by modern man, by their diseases, or for ther own strange reasons. It is very sad to think they might all die. 'The Dreaming' is the time for Aboriginals when humans took the form of animals, when spirits were free to roam and in this song as the civilized begin to dominate, the 'original ones' dream of the dreamtime. (Press statement by Kate Bush, 1982)

Many an Aboriginie's mistaken for a tree
'til you near him on the motorway, the tree begin to breathe