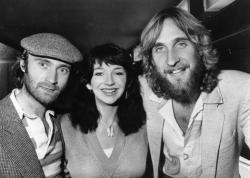 Born as Philip David Charles Collins in West London on 30 January 1951, Phil Collins played drums from the age of five and completed drama school training. After various roles as a child actor, he pursued a music career. He joined Genesis in 1970 as their drummer and, after the departure of Peter Gabriel in 1975, became the band's lead singer as well.

Collins began a solo career in the 1980's, initially inspired by his marital breakdown and love of soul music, releasing a series of successful albums, including Face Value (1981), No Jacket Required (1985), and ...But Seriously (1989). He became known for a distinctive gated reverb drum sound on many of his recordings.

On 21 July 1982, Phil Collins appeared on stage with Kate Bush - along with Pete Townsend, Mick Karn and Midge Ure - while she performed The Wedding List live on stage during the Prince's Trust Rock Gala.

In 1996, Collins left Genesis to focus on solo work, but returned for their 'Turn It On Again Tour' in 2007. Following a five-year retirement to focus on his family life, Collins released an autobiography and began his 'Not Dead Yet Tour' which runs from June to December 2017.