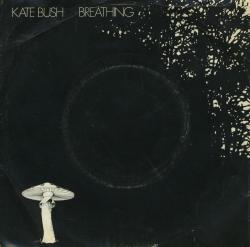 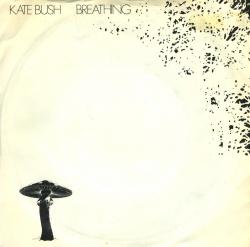 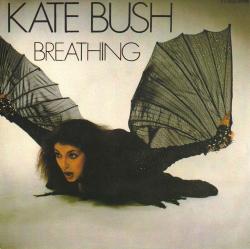 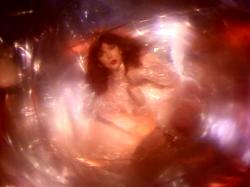 Still from the music video of 'Breathing'

Song written by Kate Bush. Originally released as the lead single from Kate's third album Never For Ever. The lyrics of the song are about a foetus, very much aware of what is going on outside the womb and frightened by nuclear fallout, which implies that the song is set either during a nuclear war scare or a post-apocalyptic birth. The lyrics also refer to the foetus absorbing nicotine from the mother's smoking. In an interview that year Bush described the song as her "little symphony", adding that she considered it her best work to date. Bush stated that the information within the song mostly came from a documentary she had seen about the effects of nuclear war, while the tone of the song was inspired by Pink Floyd's 'The Wall'. The song was recorded over three days in early 1980.

The track includes spoken words describing the flash from a nuclear bomb. The exact words - which are missing from the artwork on the album - are: "In point of fact it is possible to tell the Difference between a small nuclear explosion and a large one by a very simple method. The calling card of a nuclear bomb is the blinding flash that is far more dazzling than any light on earth - brighter even than the sun itself - and it is by the duration of this flash that we are able to determine the size of the weapon. After the flash a fireball can be seen to rise, sucking up under it the debris, dust and living things around the area of the explosion, and as this ascends, it soon becomes recognisable as the familiar 'mushroom cloud'. As a demonstration of the flash duration test let's try and count the number of seconds for the flash emitted by a very small bomb; then a more substantial, medium-sized bomb; and finally, one of our very powerful, 'high-yield' bombs."

'Breathing' was only released as a 7" single, but many different sleeves exist because of regional varieties. The B-side is The Empty Bullring, a non-album track.

There are two versions of 'Breathing': the single version and the album version.

The music video features Bush in a plastic bubble, trying to get out.

Kate Bush only performed 'Breathing' live once, during a Comic Relief concert on 25 April 1986. It was a solo piano version.

'Breathing' is a warning and plea from a future spirit to try and save mankind and his planet from irretrievable destruction. (Kate Bush Club newsletter, September 1980)

It's about a baby still in the mother's womb at the time of a nuclear fallout, but it's more of a spiritual being. It has all its senses: sight, smell, touch, taste and hearing, and it knows what is going on outside the mother's womb, and yet it wants desperately to carry on living, as we all do of course. Nuclear fallout is something we're all aware of, and worried about happening in our lives, and it's something we should all take time to think about. We're all innocent, none of us deserve to be blown up. (Deanne Pearson, 'The Me Inside'. Smash Hits (UK), May 1980)

When I wrote the song, it was from such a personal viewpoint. It was just through having heard a thing for years without it ever having got through to me. 'Til the moment it hit me, I hadn't really been moved. Then I suddenly realised the whole devastation and disgusting arrogance of it all. Trying to destroy something that we've not created - the earth. The only thing we are is a breathing mechanism: everything is breathing. Without it we're just nothing. All we've got is our lives, and I was worried that when people heard it they were going to think, 'She's exploiting commercially this terribly real thing.' I was very worried that people weren't going to take me from my emotional standpoint rather than the commercial one. But they did, which is great. I was worried that people wouldn't want to worry about it because it's so real. I was also worried that it was too negative, but I do feel that there is hope in the whole thing, just for the fact that it's a message from the future. It's not from now, it's from a spirit that may exist in the future, a non-existent spiritual embryo who sees all and who's been round time and time again so they know what the world's all about. This time they don't want to come out, because they know they're not going to live. It's almost like the mother's stomach is a big window that's like a cinema screen, and they're seeing all this terrible chaos. (Kris Needs, 'Fire In The Bush'. Zigzag (UK), 1980)

From my own viewpoint that's the best thing I've ever written. It's the best thing I've ever produced. I call that my little symphony, because I think every writer, whether they admit it or not, loves the idea of writing their own symphony. The song says something real for me, whereas many of the others haven't quite got to the level that I would like them to reach, though they're trying to. Often it's because the song won't allow it, and that song allowed everything that I wanted to be done to it. That track was easy to build up. Although it had to be huge, it was just speaking - saying what had to be put on it. In many ways, I think the most exciting thing was making the backing track. The session men had their lines, they understood what the song was about, but at first there was no emotion, and that track was demanding so much emotion. It wasn't until they actually played with feeling that the whole thing took off. When we went and listened, I wanted to cry, because of what they had put into it. It was so tender. It meant a lot to me that they had put in as much as they could, because it must get hard for session guys. They get paid by the hour, and so many people don't want to hear the emotion. They want clear, perfect tuning, a 'good sound'; but often the out-of-tuneness, the uncleanliness, doesn't matter as much as the emotional content that's in there. I think that's much more important than the technicalities. (Kris Needs, 'Fire In The Bush'. Zigzag (UK), 1980)

I wanted to write a song, and I came up with some chords which sounded to me very dramatic. Then up popped the line, 'Outside get[s] inside,' as I was trying to piece the song together, and I thought it would be good to write a song about a baby inside the womb. Then I came to a chorus piece, and decided that the obvious word to go there was 'Breathing', and I thought automatically that it had been done before. But asking around, I couldn't understand why it hadn't, because it's such a good word. Then 'breathing' and the baby turned into the concept of life, and the last form of life that would be around - that would be a baby that was about to be born after the blast. It was a very personal song. I thought at the time that it was self-indulgent, and it was something I just did for myself, really. For me it's a statement that I hope won't happen. (Kate Bush Club newsletter, April 1980)

It got to the point when I heard [Pink floyd's The Wall] I thought there's no point in writing songs any more because they'd said it all. You know, when something really gets you, it hits your creative centre and stops you creating... and after a couple of weeks I realized that he hadn't done everything, there was lots he hadn't done. And after that it became an inspiration. 'Breathing' was definitely inspired by the whole vibe I got from hearing that whole album, especially the third side. There's something about Floyd that's pretty atomic anyway. (Colin Irwin, 'Paranoia And Passion Of The Kate Inside'. Melody Maker (UK), 4 October 1980)

And I think the one that was the most difficult, but the one I was most pleased with was 'Breathing' - that was an epic. We spent three days trying to get that backing track. And the silly thing was that we had all the riffs and everything by the second day, it was just that no-one could play as if they meant it, because we'd been playing it for so long. (Peter Swales interview for Musician, 1985)

I think it's one of the few that I've done that I can say that I'm quite happy with some of the things we did in it. It's one of those things. The way you make a video, quite often the song isn't lending itself to the kind of visual ideas you'd like it to. And with 'Breathing,' I think it had such a strong story that it was easier for us to visualize something that we'd felt was powerful. (Christopher Ward, Much Music Spotlight, 28 Januari 1987)

There was a point in people's lives when the imminent prospect of war was scaring the shit out of them, and that resulted in a lot of anti-war songs. At that time it was worthwhile. When I wrote 'Breathing' it seemed like people were sitting waiting for a nuclear bomb to go off. Nuclear power seemed like... Someone was getting set to blow us up without our consent. I felt I wanted to write a song about it. If it was something that was bothering so many people then yes, I think it was worthwhile. Songs or films or little individuals don't do anything on a big level. Big things need bigger things to change them. (Richard Cook, 'My Music Sophisticated? I'd Rather You Said That Than Turdlike!'. NME (UK), October 1982)

'Breathing', I think, was one of my first, what I would call spiritual songs. The subject matter isn't necessarily, but the spark is. When I was writing it, it felt like: Hang on, I don't think I'm writing this - this is a bit too good for me! Rather than the song being my creation, I was a vehicle for something that was coming through me. (Mat Snow, 'Follow That!'. Q HMV Special magazine, 1990)

After the blast
Chips of plutonium are twinkling in every lung