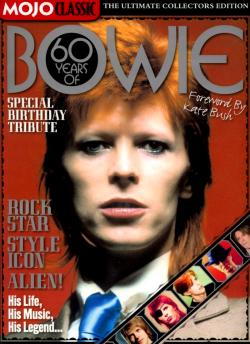 David Bowie was born as David Robert Jones in South London's Brixton neighborhood on 8 January 1947. His first hit was the song "Space Oddity" in 1969. The original pop chameleon, Bowie became a fantastical sci-fi character for his breakout Ziggy Stardust album. In 1973, he disbanded the Spiders and shelved his Stardust persona. Bowie continued on in a similar glam rock style with the album Aladdin Sane (1973), which featured 'Jean Genie' and 'Let's Spend the Night Together', his collaboration with Mick Jagger and Keith Richards. Around this time he showed his affection for his early days in the English mod scene and released Pin Ups, an album filled with cover songs originally recorded by a host of popular bands, including Pretty Things and Pink Floyd.

By the mid 1970s Bowie had undergone a full-scale makeover. Gone were the outrageous costumes and garish sets. In two short years he released the albums David Live (1974) and Young Americans (1975). The latter album featured backing vocals by a young Luther Vandross and included the song 'Fame', co-written with John Lennon, which became Bowie’s first American number one single. The albums 'Low' (1977), 'Heroes' (1977) and 'Lodger' (1979) make up what became known as the Berlin Trilogy, recorded in the then-divided Berlin. In 1980 Bowie, now living in New York, released Scary Monsters, a much-lauded album that featured the single 'Ashes to Ashes', a sort of updated version of his earlier 'Space Oddity'.
Three years later Bowie shed his alter egos that were so essential for his stage persona altogether, presenting himself as a 'normal' singer for the album 'Let's Dance', produced by Nile Rodgers. While still releasing albums in the 1980's, he spent more time involved in movies, acting in 'Merry Christmas Mr. Lawrence' (1983),  'Absolute Beginners' (1986) and 'Labyrinth' (1986). At the end of the 1980's he did the Sound & Vision tour, playing his greatest hits, while releasing two albums with Tin Machine, which both proved to be unsuccessful.
David Bowie released a few more albums during the 1990's, finishing with 2003's 'Reality'. During the tour that followed, he had a major health scare when he suffered a heart attack. It would take ten years to release a new album. 'The next day' (2014) proved to be a triumphant comeback for the artist. 2016 started with the release of 'Darkstar', which was lauded by critics. Just one day after its release, David Bowie passed away after an eighteen month battle with cancer.

In an article in Mojo in 2007, Kate Bush described her love for David Bowie's music, the concert she attended - the final live performance by Ziggy Stardust and the Spiders from Mars on 3 July 1973 - and the first occasion when she met the star.

I was sitting in my bath, submerged in bubbles, listening to Radio Luxembourg when I heard David Bowie for the first time. "There's a starman waiting in the sky." I thought it was such an interesting song and that he had a really unusual voice. Soon I was to hear that track everywhere, and Bowie's music became a part of my life.
Was it Bo-Wie, Bowie or B'wee? Everything about him was intriguing. When I saw him on Top Of The Pops he was almost insect-like, his clothing was theatrical and bizarre; was that a dress? No one was sure, but my conclusion was that he was quite beautiful. His picture found itself on my bedroom wall next to the scared space reserved solely for my greatest love - Elton John.
A fantastic songwriter with a voice to match, Bowie had everything. He was just the right amount of weird, obviously intelligent and, of course, very sexy. Ziggy played guitar. And I was there to see his last show as Ziggy Stardust with The Spiders From Mars. The atmosphere was just so charged that at the end, when he cried, we all cried with him.
Working at Abbey Road studios some years later, I popped in to see a friend on another session....I was stopped in my tracks. Standing elegantly poised behind the console was David Bowie. He was lit from above and smoking a cigarette. He said, "Hello Kate." I froze on the spot and said, "Er...Hello," and then left the room, caught my breath outside the door and didn't dare to go back in again. We've met many times since then and I don't have to leave the room any more....or do I?
He's made all the right moves, each album exploring a new sound, a new way of looking at things, experimental and brave. Starring in The Man Who Fell To Earth made him a successful actor as well. His introduction to The Snowman animation, although brief, made the film more poignant, as if the whole thing somehow belonged to him. I just loved his hilarious Extras cameo, and the quirky Tesla in The Prestige. He is the quintessential artist, always different and ever surprising, an inspiration for us all. (Kate Bush, Foreword, Mojo Classic: 60 years of Bowie, 2007)

David Bowie had everything. He was intelligent, imaginative, brave, charismatic, cool, sexy and truly inspirational both visually and musically. He created such staggeringly brilliant work, yes, but so much of it and it was so good. There are great people who make great work but who else has left a mark like his? No one like him.
I’m struck by how the whole country has been flung into mourning and shock. Shock, because someone who had already transcended into immortality could actually die. He was ours. Wonderfully eccentric in a way that only an Englishman could be.
Whatever journey his beautiful soul is now on, I hope he can somehow feel how much we all miss him. (David Bowie, as remembered by.... The Guardian website (UK), 17 January 2016)