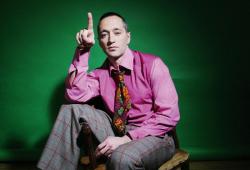 Theo Bleckmann was born on 28 May 1966 in Dortmund, West Germany. He grew up appreciating both traditional music from his native Germany as well as American popular music and The Great American Songbook. He trained as an ice dancer in Germany, and was a junior champion before deciding to pursue a career in music. In 1989 he moved to New York City (subsequently becoming an American citizen in 2005) after meeting legendary jazz vocalist Sheila Jordan at a workshop in Graz (Austria), who remains an influential mentor and colleague to this day.

Starting in 1992, he's released more than a dozen albums, with music ranging from jazz to electronically processed voice experiments. In 2011, he released the album Hello Earth! - The Music Of Kate Bush.

His work has been recognized with several awards including a Grammy Nomination in 2010 for the best 'Classical Crossover Album'. He received the ECHO Award for Best Singer of the Year in 2010, a Bessie Award, Presser Award for Outstanding Talent and the ASCAP/GershwinAward for his composition "Chorale #1 for Eight Voices", as well as grants from Arts International, the Franklin Furnace Fund for Performance Art, New York Foundation for the Arts, Meet The Composer and the Council on Humanities, PA.