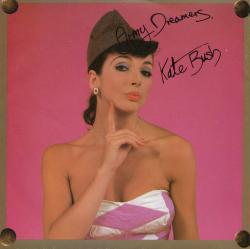 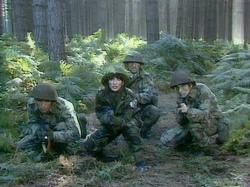 Still from the music video of 'Army Dreamers'

Song written by Kate Bush. The song is about the effects of war and about a mother who grieves for her young adult son, who was killed on military manoeuvres. Saddened by his unnecessary death, she wrestles with her guilt over what she could have done to prevent it. The song was originally released on the album Never For Ever, and as a single soon thereafter.

The song was blacklisted during the Gulf War in 1991 – joining a list of 67 songs simultaneously banned from BBC airplay, including The Beatles, Frank Sinatra, ABBA and Queen.

'Army Dreamers' was released as a 7" single, with two songs on the B-side: Delius (Song of Summer) and Passing Through Air.

The music video opens on a closeup of Kate Bush, dressed in dark green camouflage, holding a child. She blinks in synchronisation with the song's sampled gun cocks. The camera pulls out and shows that Bush has a white-haired child on her lap. The child walks off and returns in military combat uniform. Bush and several soldiers (one of whom has "KT8" or "KTB" stencilled on the butt of his rifle: "KTB" was a monogram used by Bush early in her career) make their way through woodland, amid explosions. As the song progresses, Bush reaches out for the child soldier, but he disappears. Finally, one of the soldiers is blown up.

Kate performed 'Army Dreamers' on television a few times in different territories. In Germany, she appeared in the programme Rock Pop, to lipsynch the song as 'Mrs. Mop'. In the Netherlands, she performed the song in Veronica Totaal on 15 October 1980 dressed in an army outfit.

It's the first song I've ever written in the studio. It's not specifically about Ireland, it's just putting the case of a mother in these circumstances, how incredibly sad it is for her. How she feels she should have been able to prevent it. If she'd bought him a guitar when he asked for one. (Colin Irwin, 'Paranoia And Passion Of The Kate Inside'. Melody Maker (UK), 10 October 1980)

The song is about a mother who lost her son overseas. It doesn't matter how he died, but he didn't die in action - it was an accident. I wanted the mother to be a very simple woman who's obviously got a lot of work to do. She's full of remorse, but he has to carry on, living in a dream. Most of us live in a dream. (Week-long diary, Flexipop, 1980)

No, it's not personal. It's just a mother grieving and observing the waste. A boy with no O-levels, say, who might have [??? Line missing!] whatever. But he's nothing to do, no way to express himself. So he joins the army. He's trapped. So many die, often in accidents. I'm not slagging off the army, because it's good for certain people. But there are a lot of people in it who shouldn't be. (Derek Jewell, 'How To Write Songs And Influence People'. Sunday Times (UK), 5 October 1980)

The Irish accent was important because the treatment of the song is very traditional, and the Irish would always use their songs to tell stories, it's the traditional way. There's something about an Irish accent that's very vulnerable, very poetic, and so by singing it in an Irish accent it comes across in a different way. But the song was meant to cover areas like Germany, especially with the kids that get killed in manoeuvres, not even in action. It doesn't get brought out much, but it happens a lot. I'm not slagging off the Army, it's just so sad that there are kids who have no O-levels and nothing to do but become soldiers, and it's not really what they want. That's what frightens me. (Kris Needs, 'Fire In The Bush'. ZigZag (UK), 1980)